Summary Display
1 Sexuality
2 The division of household chores
3 money
4 child education
4.1 to go further
5 The relationship of the couple with the families of origin
6 How do you really talk about these five ultra-sensitive topics?

The main cause of conflict remains the difference in the rhythm of desire between the partners: one of the two (no, not always the man) wants to make love much more often than the other.

The other most common sources of tension:

– the predictability of sexual intercourse. There are no more surprises, the “program” is immutable, boredom arrives and with it, the loss of desire (yes, it is almost always women who complain about this predictability)

– a premature ejaculation, that is to say, an ejaculation that occurs at a moment judged subjectively too fast, which is not named. Great suffering for the man and for his partner, suffering aggravated by the silence that very often accompanies it.

The division of household chores

The best husbands “help” their wives in executing all these tasks, illustrating the difficulty of equally sharing the famous mental load: a man does the shopping, it’s fine. That you think about the need to do them and do them without even talking about it with your partner, that’s much better!

What is mine is yours and vice versa?

Does each of the partners have their own personal bank account and feed a joint account for household expenses? In this case, according to what distribution key: 50% each or a contribution proportional to income? What if one of them doesn’t work?

All of these issues, which are important in terms of the balance of power that this will generate, are rarely discussed between the partners. A reality has been installed without having been the object of real negotiation.

Tensions can be high: “you spend too much”, “you don’t earn enough”, “you’re stingy”…

Significant differences may appear in this sensitive area: one of the partners will be considered too lax, or too rigid, by the other. The efforts of one to fix a framework will sometimes be sabotaged, more or less consciously, by the other. Children will be quick to use these differences to take advantage of them, which will only exacerbate the parents’ tensions.

But you never told me that by Carolle and Serge Vidal-Graf (Youth), buy in Culture.

The relationship of the couple with the families of origin

When the families of origin are very different -culturally, economically, religiously…- the relationship of each spouse with the family of origin of the other can become a highly sensitive issue.

For one of them, visiting his in-laws every three months is enough, while for the other it is unthinkable not to see his parents every weekend.

When the families of origin are very different, the spouses will sometimes have to display treasures of patience and tolerance so as not to endanger their partner.

You may also like :   Couple: is the contract of infidelity tempting you?

Some mutually agree not to visit each other’s family – or only on very rare occasions – which avoids many disputes.

How do you really talk about these five ultra-sensitive topics?

Practicing silent listening.
This particular form of regular communication, for example once a month, makes it possible to create the best possible framework for mutual and deep listening.

Specifically, what is it?

While one speaks, to address one of the sensitive issues, the other formally commits to doing nothing but listening. You agree not to interrupt the speaker, not to ask questions, not to make comments or suggestions. He binds himself to this commitment until the speaker says, “I’m done, I said what I had to say.”

It is about being touched by the words of the other: listen to his word as an expression of HIS truth and not of the truth.

When it is the turn of the other to speak, he will refrain from conceiving his speaking time as a response to what he has heard. It’s about sharing what you have to say and not reacting to what you just heard.

Silent listening is not a magic potion, a universal cure-all, but it is a very valuable tool that really allows you to approach sensitive issues differently. You risk nothing by trying!

A practical tip to finish: fix, at the end of each silent listening, the date of the next meeting! Otherwise, time passes and you risk “forgetting” to make an appointment… 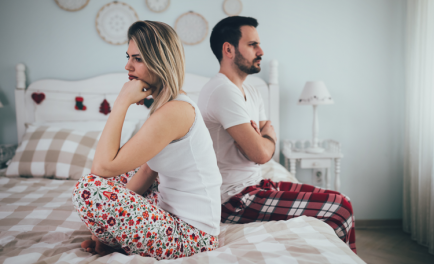 What do your couple conflicts say?
Daily love life is full of conflicts of all kinds. Opportunities to curse, offend or argue are not lacking. Find out how they do or don’t conflict and what that says about your relationship.

You may also like :   Parental conflicts: what are the consequences for the child's relationships?
Related Topics:
Up Next

My daughters do not obey their nanny. Should she replace him? |

My son is afraid of change, what should I do? |

What is the breathing game?

However, despite the risk of injury or fainting, this practice has many adherents. A study conducted in 2021 among 4,000 American students indicates that 26.5% of those surveyed had drowned during their last sexual encounter. Another study carried out the same year on other students reveals more worrying figures: 58% of them have already been suffocated by a partner.

Navel play: What is this sexual practice that raises the temperature under the duvet? https://t.co/IsFNfa7plx

A sexual practice that can be deadly

You may also like :   Mixed family: how to manage arguments?

Although there are no official figures on the number of deaths caused by this practice, Grace Millane, a 22-year-old woman, died from it in 2018. Police found traces of strangulation that could correspond to a “four to five minute” suffocation. His partner, Jesse Kempton, was convicted of femicide and sentenced to life in prison. The defense had confided “that the young woman had accidentally died at the end of a sexual game that had gone wrong, a version that had been categorically rejected by the jury,” he recalls. paris party.

TEST- What is your relationship with pleasure? ?

Couple: what your position on the sofa says about your relationship

the posture adopted by couples when they sit on a sofait’s a window into your relationship status. This is the conclusion of a study conducted by Georgina Barnett, a British psychologist, on 2,000 cohabiting couples. “Tell me how you’re sitting, I’ll tell you if everything is fine in your relationship,” says the specialist in an interview with Stylish Maternity.

Sitting next to each other: a sign of imbalance?

While most couples tend to sit on the couch together, there are some pretty subtle signs that it can be signs of relationship problems. When the partners occupy only one corner of the bench and are too close together, this is synonymous with imbalance in your relationship. “The comfortable person in the corner takes up the space, is confident, and has power in the relationship. The other, on the other hand, seems less confident. He is looking for contact and reassurance, ”explains Georgina Barnett.

Couple: How to solidify your relationship with romantic nostalgia https://t.co/cFsJD1IBCT

However, there is a nuance when they sit more in the center of the sofa, maintaining physical contact, such as a hand on the thigh or another. “Couples established in this way have trust your relationship and therefore can afford personal space. It is a mixture of intimacy and freedom”, analyzes the psychologist. But although in love, the latter no longer experience the passion of the first days, according to the expert.

When the position on the sofa heralds a crisis

According to the psychologist, time is serious in the event that the two partners are sitting at two different ends. “It’s even worse if her legs are crossed in opposite directions,” she says. This posture is generally a sign of a Tension in the couple. It can also be a sign that something was left unsaid or resentment, according to Georgina Barnett.

You may also like :   Couple: is the contract of infidelity tempting you?

And contrary to what one might think, if the partners are based on different bases, distanced from each other, it does not necessarily mean that they are in crisis. can only be couples comfortable enough with each other to have their own space. Although this study is based on a fairly large sample, its conclusions must be taken with caution.

TEST- Is your partner strong? ?

The Relationship Escalator: Are You Following This Conventional Love Pattern?

Dating, formalizing your relationship, living together, getting married and having children. Many people perceive this life path map as the ultimate blueprint. This diagram has a name: the relationship escalator. The goal of those who take it is to peak by aging together, after checking a certain number of boxes.

What is a “relationship escalator”?

This expression designates a love pattern widespread, but increasingly questioned within society. The Urban DictionaryThe bible of slang and popular expressions defines the relationship ladder as “the societal expectation that a romantic relationship should automatically follow a set of stages and lead to marriage, parenthood, and home ownership.”

A somewhat bland relationship, a love story that is running out of steam? This is how scientists have determined it as a solution for your partner to last healthy pic.twitter.com/hMspC6TyEE

Amy Gahran, author of Off the Relationship Escalator, Uncommon Love and Life, was the first to mention this concept. She explains that this notion is “a standard by which most people assess whether an intimate relationship that develops is meaningful, serious, good, healthy, committed, or worth pursuing or maintaining.” In other words, the escalator of the relationship denotes ME’set of beliefs that perceive the most conventional pattern of love as the most rewarding and valued. This concept is made up of several steps that can vary depending on the culture. But they generally follow this timeline:

• Flirt for a few weeks/months

• Introduce your partner to loved ones

• Get married or settle down

A satisfactory relational schema if it is not imposed

There is absolutely nothing wrong with taking this kind of path of love if it makes us happy. Instead, what can be problematic is imposing it on others as an absolute norm and the only valid model. Pointing fingers at this practice is also a way of denouncing the constant pressure on singles and couples who do not formalize their civil unions.

Gabrielle Smith, an author and poet who is very sensitive to issues related to sexuality and romantic relationships, analyzes this practice in an article by granist “The relationship escalator is designed for heterosexual relationships between singles and preferably for relationships within a two-income middle-class household. Many people are not part of this demographic, and those who are still feel the pressure it brings. »

If this mandate can affect all genders, it is particularly intense when it comes to heterosexual women. “Society makes you think it’s easy to get married, have children, or combine finances. But the reality for many is that it is neither possible nor smart”, concludes Gabrielle Smith.

TEST- What marriage really means to you ?